PARADE THEME – “A DAY AT THE RACES” 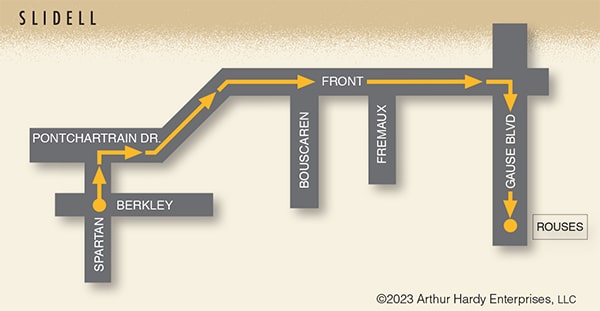 The parade starts at the corner of Spartan Drive and Pontchartrain Drive (Hwy 11).

The parade then heads north on Pontchartrain Drive into the heart of Slidell passing many of Slidell’s staple businesses such as Ace Insurance, Castaway’s and the Southside Cafe.

The parade route then quickly jogs north and continues up Front Street (Hwy 11) until it reaches Gause Boulevard, one of Slidell’s signature streets.

The parade then takes a turn east onto Gause Boulevard (Hwy 190) and heads towards the interstate (I-10), passing Slidell Memorial Hospital, Cross Gates Athletic Club followed by Copeland’s restaurant and The NOLA Southern Grille before terminating near the Midtown Square Shopping Center (Hobby Lobby and Office Depot).